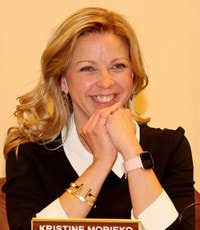 ​Born and raised in the Borough of Glen Rock, Kristine and her husband Bryan bought her childhood home where they are raising their 2nd grade twins (and 5th generation Glen Rockers), Maddie and Brayden, along with their dog, Winston. While serving the residents of Glen Rock is a full time commitment, she maintains a full time career in the legal field.  She has a degree from Villanova University where she graduated with her BSA in Accounting and worked on Wall Street until 911 where she switched careers and entered the legal field.  She achieved Phi Theta Kappa membership while pursuing her paralegal certificate and has worked in Municipal Law, Wills and Estates, Real Estate Law and her favorite, Criminal Defense.

In 2015 she was elected to the Borough Council, turning the Council BLUE for the first time in History.  During her tenure on Council she served on the Public Safety Committee (Chair & Fire Department Liaison), Member of the Planning Board, Member of the Library Board of Trustees, Member of Glen Courts Trustees, COAH Liaison, OEM Liaison and Communications Liaison.  In her third AND fourth year, Kristine was named Council President, the first ever to be chosen for back to back terms.

In 2020, Mayor Morieko was sworn in as the Covid-19 Pandemic began.  Through her advocacy for the Borough and its surrounding towns, she was elected President of the North West Bergen Mayors Association.  Mayor Morieko was also nominated and sworn in as a member of the Executive Board of the New Jersey Conference of Mayors where she sits on the Legislative Committee.  Additionally, she is a Commissioner for the Bergen County Commission on the status of Women.

In her third year, her focus remains on the health, safety and welfare of the residents and Borough employees.  Her philosophy is every elected official serves at the pleasure of the residents, and everyone has an equal voice in their community.
​
Facebook: ​www.facebook.com/kristinemoriekoGR/ 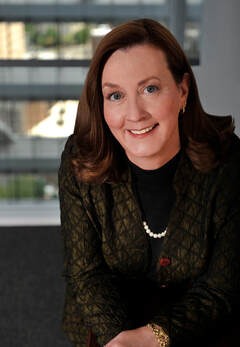 Teresa Gilbreath worked in a highly regulated financial services business for 37 years.  As the Chief Compliance Officer for key divisions of this business, she was responsible for international investments, international insurance, U.S. asset management compliance programs, and managing 200 people situated in 15 countries.  She established new policies and programs in both U.S. and non-U.S. organizations.  Her outstanding ability to provide a bridge between the law and the operational requirements and standards contributed to her success.

Teresa was elected to the Council in 2019 and most recently served as liaison to the Board of Health, Department of Public Works, and Chair of the Finance Committee.  She was elected Council President for 2022, and she now chairs the Finance Committee and acts as a liaison to the Board of Health, the Community Relations Advocacy Network (CRAN), and Ridgewood Water while serving as a member of several other committees.

During her first two years on the Council, Teresa helped to launch the Glen Rock Perennial, a newsletter for Glen Rock seniors, spearheaded an evaluation of the E-Code, led a review of the Employee Policies and Procedures Manual as well as the Employee and Volunteer Handbooks, and organized the 2022 calendar.
​
Teresa has lived in Glen Rock for 23 years with her husband Lee and her daughter Kyra. 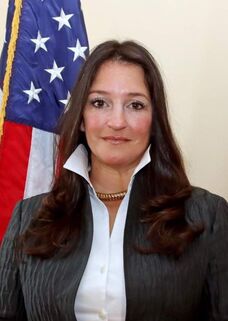 Amy has long believed that giving back is imperative for the health of a community. She has strong convictions regarding human and equal rights, and that every person’s voice is important.  These values lead to her decision to run for office. Amy was elected to The Glen Rock Borough Council in 2014. As Councilwoman, she has served twice as Council President (current), and is liaison to the DPW, Ridgewood Water, The Glen Rock Historical Society, and the Arboretum. She also sits on Parks and Recreation, and Planning and Development, and has sat on the Finance Committee, and Senior Advisory.

As a classically trained actress, graduating from Tisch School of the Arts at NYU, Amy began her career in the performing arts, performing extensively in Shakespeare Festivals across the country, as well as directing two world premier operas at Symphony Space in New York City. After his untimely death, in 2014, Amy restructured her husband’s business establishing Alfa Productions, an event coordination business. Seeking more fulfilling work that focuses on the greater good, in 2017 Amy was hired and now works full time as Director of Development at Paterson Habitat for Humanity. Amy’s greatest joy, however, is having the honor of raising her three children, Jasper, Teddy and Phoebe.
​Amy believes open-mindedness, and collaboration leads to the best results, and will further the bright future of Glen Rock and beyond. 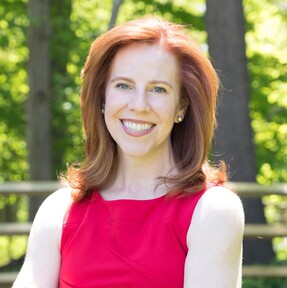 A 12-year resident of Glen Rock and mother of three school-aged children (18, 16, and 14), Mary Barchetto has a long record of leadership and initiating action in community service.  Mary spearheaded the successful effort to bring two national youth running programs to Glen Rock (Girls on the Run and HERO Boys) and held a variety of leadership and volunteer positions with  Central School HSA, Girl and Boy Scouts, and the League of Women Voters before running for Council in 2018.  Since then, Mary has continued to demonstrate her deep commitment to building community here in Glen Rock by organizing events such as blood drives, Glen Rock's Quasquicentennial Celebration, Touch-A-Truck and the Town-wide Movie and Campout.  Mary co-lead the Restart Glen Rock initiative to help Glen Rock transition to life during the pandemic and help local businesses maintain services.  Mary also is an advocate for seniors, helping to start the Borough's senior newsletter, and championing an increase in senior services and programming, including recent improvements to the Municipal Annex.  Mary believes our town should be a place where residents of all walks of life have an opportunity to be active, engaged participants. 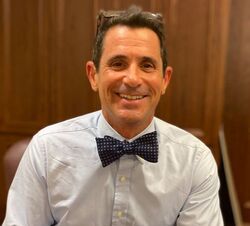 Robert Dill joined the council in January of 2020.  He has lived in Glen Rock with his wife for 26 years.  He has two daughters, one a senior at Muhlenberg College, the other a graduate of Skidmore College in 2020, now working as an environmental scientist.  He works at Bergen Community College and has so for the past 30 years teaching biology and environmental science.

He is currently the liaison for the Shade Tree Advisory Committee, GRFD, GRTV, and is the chair for the Parks and Rec department and serves on the DPW committee.

He also serves as the assistant scoutmaster for troop 15 in Glen Rock and is an avid runner and backpacker. 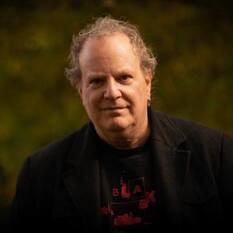 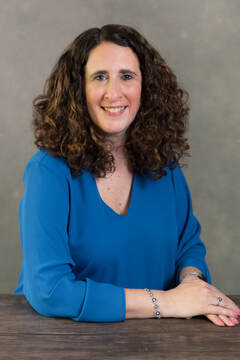 Jill has lived in Glen Rock for 13 years with her husband Todd and their three children, Dan, Emily and Matt.  She has always been an active member of the community, holding a number of leadership and volunteer positions at her children’s schools and volunteering with different community service organizations. She believes strongly in giving back to her community. She brings her background as a Harvard-educated lawyer, a long-time resident of this community, a parent and a concerned citizen, and will do everything possible to help Glen Rock thrive for all of its residents.